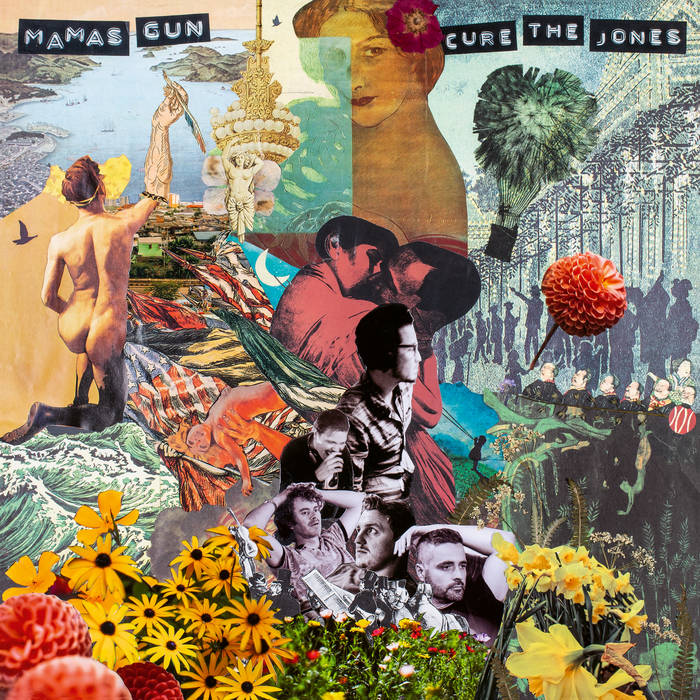 Out of the turbulence of the last two years comes the fifth album from UK-based soul outfit Mamas Gun - a lush, nuanced and expansively contemporary meditation on a world turned upside down, embedded in the classic soul tradition of Bill Withers and Marvin Gaye.

Building on 2018 album Golden Days and the band’s status as a world-renowned live act, 11-track opus Cure The Jones represents Mamas Guns’ most complete and powerful work to date - a joyous and sophisticated exposition of song-craft, that explores themes of love, loss, life through the most pressing social and political issues of the day. Written and produced during the pandemic by Mamas Gun frontman Andy Platts with additional intricate soundscaping from drummer Chris Boot, Cure The Jones was recorded direct to tape with an array of analogue gear at Platts’ home studio in just three days, focussing the soulful energy of the band into a coherent gospel-tinged whole.

Formed in 2009, the current five-piece of Andy Platts (vocals), Terry Lewis (guitar), Dave Oliver (keys), Chris Boot (drums) and Cameron Dawson (bass) bring a range of influences to the table. Platts has previously worked with Rod Temperton, Brian Jackson and John Oates (of Hall & Oates), and Lewis’ credits include collaborations with Leon Ware, Lewis Taylor and The Impressions. Elsewhere in the band, Oliver cites his love for NYC Latin jazz as a major influence, while Boot’s full-bodied drums root the band in the lineage of Durand Jones and Lee Fields. Bassist Cameron Dawson brings a contemporary jazz-funk sensibility developed as part of Rhythm Section outfit Vels Trio. Both youthful and mature beyond their years, Mamas Gun are bringing a unique freshness to the classic soul sound. This blend of classic and contemporary influences sparked millions of streams worldwide and garnered praise from The Sunday Times, Billboard, The Guardian, and Uncut Magazine. Collectively, the London-based group's first three albums, spawned Top 10 hits on four continents, including #1 single in Japan, and top 10 airplay positions in UK and parts of Europe; propelled by the band's sold-out headline tours and full-tilt performances, including significant appearances at the Billboard Music Awards and music festivals including Love Supreme, Java Jazz, and Seoul Jazz festival.

While honing a sound built around vintage equipment, “Cure The Jones” hears Platts stretch his legs as one of the UK’s top song-writers, imbuing his lyrics with the urgency of unfolding events. As he describes, “Cure The Jones carries the torch for soul music being able to reflect and say something about contemporary life in a meaningful way that hopefully preserves the authenticity of how those great social consciousness albums were made.” Taking inspiration from the work of Scott Walker and Shuggie Otis among others, the album opens with the soaring metaphysics of ‘When You Stole The Sun From the Sky’, capturing the moment of seismic global shift brought on by the pandemic in the story of a love lost - a conceit which runs through the album as it moves from fear and despair to a sense of hope and joy.

Written the day Bill Withers passed away, ‘Looking For Moses’ is a homage to the great soul man, referencing his iconic track ‘Use Me’ to channel a sense of togetherness picked up again on ‘Party For One’. Shaped by a love for Sly & the Family Stone’s low-slung funk workout ‘Thank You For Talking To Me Africa’, ‘Party For One’ is a paean to community and the company of strangers, with a loping bassline that sits deep in the pocket. In the vein of the most timeless soul songs, ‘Good Love’ distills the essence of a feeling with a sensitivity for vivid imagery and the slightest metaphorical turns. As Platts explains, Cure The Jones “uses the language of soul music to reflect what’s been happening with the pandemic,” brought to life by the warm, textured and consummately realised interplay of the musicians.The album ends with ‘Daffodils’, looking back at the years we have lived from a place in the future, flipping the lilting, anxious Bossa of the track’s opening section into an uplifting crescendo that speaks of the optimism at the core of the album. “Soul music is innately imbued with hope,” Platts concludes. With the return of normal life still some way away, it’s hard to think of a message we need more right now.