by Eddie Roberts & The Fire Eaters 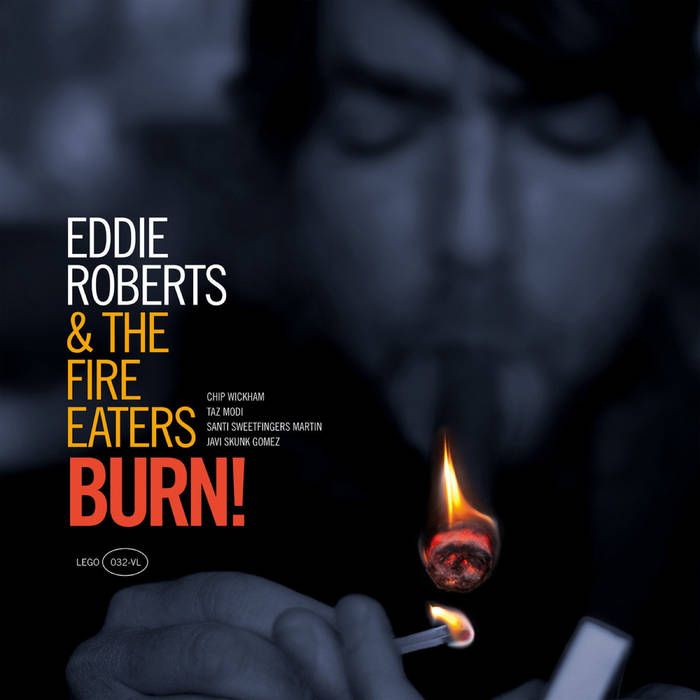 "This is a must-have album!" (Tokyo Jazz Notes)

THIS IS THE ORIGINAL PROMO SHEET:

Eddie Roberts started his music career in 1989 aged 18, having left his Welsh homeland to study Jazz at Leeds College of Music. More interested in live performing and getting his own thing going than in college work, he quickly rooted out the best players in town and set up his first band, The Jazz Mailmen, dedicated to playing the golden era of Art Blakey's Jazz Messengers. After transcribing all the parts and enforcing a dress code of Bop suits, he set about taking the UK Jazz Dance scene by storm.

During this time British Hard Bop legend Tommy Chase asked him to relocate and join his band, but Eddie had other ideas. Following his early bands The Eddie Roberts Organisation and The Three Deuces Eddie's focus shifted towards Deep Funk, the New Mastersounds were born and released their first album on Keb Darge’s Deep Funk Records. The rest is history, with six full albums recorded and an impressive history of live shows around the world. Eddie's love for 60s Blue Note & Hard Bop didn't waver despite the media hype of the Deep Funk scene. Soon Eddie was commissioned to produce a Hard Bop track for the Jazz dancers to go on Adrian Gibson’s renowned 'Messin Around' compilation. This project turned into the „Roughneck“ album, released summer 2004 on the NMS’ One Note Records label. "Trenta", released early 2007 on Salvo’s Records, features instrumental arrangements of traditional Neopolitan songs. Eddie stayed busy that year playing with Papa Mali, Johnny Vidocavitch, Idris Muhammed and The Greyboy Allstars.

„Is that all?“ Eddie Roberts asked in 2009 and the answer was simple: No! Légère Recordings had a good look on Eddie’s extensive back catalogue and released „An Introduction To Eddie Roberts“, showcasing his work from the early days up to the present. Following the releasse The New Mastersounds played their first German shows since many years. When in Spain during the same year Eddie joined forces with The Sweet Vandals’ rhythm section, adding Chip Wickham’s (Nightmares On Wax, Rae & Christian, The Pharcyde) world-class flute and Taz Modi’s funktastic organ from Leeds/UK, and he sensed that this could be the beginning of something special.

„Burn!“ is the proof that his feelings were true. The Fire Eaters, as the combo was now called, recorded the album produced by Eddie Roberts himself in 2010, completed 12 tracks including a good number of Eddie Roberts originals as well as their versions of classic acid jazz & soul tunes like „I Believe In Miracles“, the „Lope Song“ or - on CD only - „Latona“.

Listen for yourself and travel way back to the times when jazz had soul and there was freedom in the rhythm.